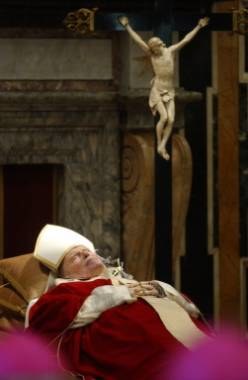 Pope John Paul II's body, its pale hands clutching rosary beads, was put on display before the world after more than 100,000 people packed St Peter's cobblestoned square for a huge open-air mass in memory of their "father and shepherd".

The death of Pope John Paul II's set in motion a chain of events laid down by centuries of papal tradition, but the face of the next pontiff is a guess no one dares to hazard.

Pope John Paul II died of septic shock and irreversible heart failure, according to the official death certificate issued by the Vatican.

A solemn mood at the first mass celebrated in St Peter's Square since John Paul II's death, attended by more than 100,000 pilgrims, gave way to a more joyful atmosphere as the faithful prayed, sang and danced for the soul of the late pontiff.

From Catholic bastions in Latin America, Europe and Africa, to Hindu-majority India, Orthodox Greece and mainly Muslim Indonesia, the world united to mourn the passing of Pope John Paul II, eulogizing him as a towering figure and a messenger of peace and mutual tolerance.

As eulogies poured in memory of Pope John Paul II, the first sounds of discord emerged from critics of his conservative views with some accusing him of befriending dictatorships and others criticizing his stance on homosexuals, celibacy and contraception.

Syria has pledged to complete its troop withdrawal from Lebanon by the end of this month, bringing to a close almost 30 years of military presence in the country, UN special envoy Terje Roed-Larsen said.

Kyrgyzstan's ousted leader Askar Akayev announced that he had agreed to resign, ending weeks of political uncertainty that followed the toppling of his Soviet-era regime in the key Central Asian nation.

Two people were killed and at least 40 wounded when three near-simultaneous bombs exploded including at an airport in restive southern Thailand and outside a Carrefour supermarket, police said.